On the waterfront: Lisbon's riverside regeneration

On the waterfront: Lisbon’s riverside regeneration | Travel | The Guardian
Everyone in Lisbon says that, since Portugal’s great age of exploration, the city has looked far out to sea. It took a hand-written list of pratos de dia outside a little restaurant on the Rua das Janelas Verdes – Street of Green Shutters – to add spice to that truism for me. Today’s specials? “Tandoori chicken €6.50, pork saag €6.50, chicken dansak €6.50, pork biryani €5.50”.
The pork dishes tell the story on a plate. In 1497, Vasco da Gama’s first expedition to the Malabar coast inaugurated Portugal’s brief heyday as a maritime superpower and began an affair with India (above all in Goa, Portuguese until 1961) that persists until now. António Costa, Portugal’s prime minister, comes from a part-Indian family that still has an ancestral house in the south Goan town of Margao.
Costa helped clear the path for the latest, and boldest, project to restore the links between the city’s hilly, labyrinthine old quarters and the waterfront that runs along the river Tagus to the sea. By the river at Belém, not far from the exuberant Jerónimos monastery built to celebrate Vasco da Gama’s return, the new Museum of Art, Architecture and Technology (MAAT) will open on 5 October with a 12-hour jamboree of exhibition launches, music and performance. 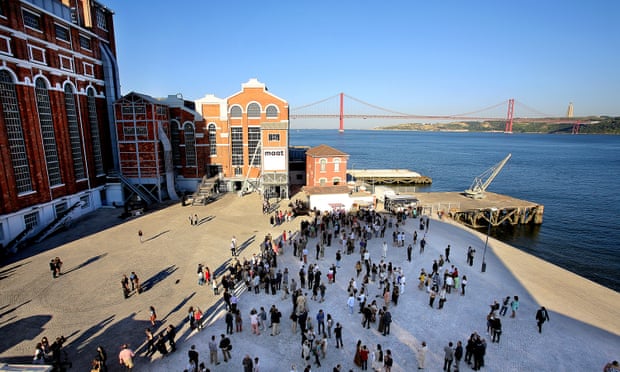 Visitors already besiege Belém (take the No 15 tram) to gasp at the show-off splendour of Jerónimos. Its outsize riot of late-Gothic decoration bears witness to the country’s short-lived burst of boundless confidence. Hordes also descend for a taste of the delicate pastel de nata (custard tart) served since 1837 at the prettily tiled Antiga Confeitaria de Belém. A takeaway queue always snakes outside this cult bakery, but after waiting in line you can find refuge nearby in the seldom-visited Jardim Botânico Tropical. Luxuriant and overgrown, this almost-secret garden, patrolled by lazily sauntering peacocks and wildfowl, gathers the trees and plants of Asia, Africa and the Americas.
If this riverside boasts an imperial heritage, it also has a gritty industrial past. The MAAT site lies next door to the Central Tejo, a hulking, handsome power plant-turned-exhibition space, already Lisbon’s answer to Tate Modern. Together, these twin centres will form a 38,000-square metre artistic “campus”. Central Tejo merits a visit in itself. In contrast to the Tate, its gargantuan turbines and pipes sit proudly intact within a red-brick cathedral of electricity.

Alongside, MAAT looks slinky and inviting on this lovely but long-neglected stretch of waterside. “It’s as though you just drift into the building,” says its British architect, Amanda Levete, chosen for the project after a string of high-profile commissions including the V&A expansion in London (due early next year) and the transformation of Galeries Lafayette in Paris. The museum’s 15,000 creamy, crackle-glazed ceramic tiles bounce sunlight off the river from its cantilevered frontage and down into the main galleries. The roof slopes up towards a broad terrace that rewards you with epic views both back towards the city, and out towards the ocean.
Container ships glide slowly under the 25 April Bridge – named the Salazer Bridge after the Portuguese dictator, until his overthrow on that date in 1974. For much of the 4km between the Cais do Sodré station and the flamboyant Belém Tower, hectic dual-carriageways, railways and tramlines conspire to sever city from river. MAAT will soon be connected to central Belém by a pedestrian bridge, providing a precious lifeline.

As with many European ports, Lisbon spent much of the late 20th century turning its back on the messy, and increasingly redundant, tangle of docks and wharves that had given it pomp and wealth. Now – as with Liverpool or Marseille, Bristol or Bilbao – culture and the leisure economy that partners it have driven the revival.
Back on the Rua das Janelas Verdes, the Museu Nacional de Arte Antiga offers not only a rich miscellany of medieval and Renaissance masterworks – from Hieronymus Bosch and Albrecht Dürer to the unique St Vincent panels by Nuno Gonçalves – but a stylish garden café. Around here, in the neighbourhoods of Santos and Alcântara, briefly fashionable clubs and bars blazed a docklands trail for artists, designers and gallerists to come. Waterside chic still sprouts in patches. I wandered over waste lots behind the shells of half-demolished warehouses and came across a seedy bingo hall.

Yet the regeneration game gathers pace, and nowhere faster than at the LX Factory. In the shadow of the bridge, this barrack-like complex was built to house textile workshops in 1846. Now there’s a warren of new businesses, from design studios and courtyard cafés to the cavernous Ler Devagar (“Read Slowly”) bookshop. Housed in a former print works, with a bar inside, this temple to the arts shelves its eclectic stock high up into lofty rafters in a vast hall presided over by a flying-bicycle sculpture.
Compared to the studied cool of its post-industrial counterparts in Shoreditch, Barcelona or Berlin, the LX still has sacks of the offbeat, slightly reclusive, charm that old Lisbon made its trademark – and the renovated waterfront will surely retain. As the line from Leonard Cohen’s “Anthem”, emblazoned on a bar facade here, puts it: “There is a crack in everything… That’s how the light gets in.”