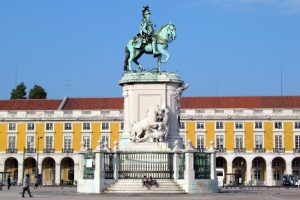 Central Portugal typically doesn’t get as much attention as the stunning Alentejo and Algarve regions in the south and wine destinations of the north, but that’s about to change.
The area between Lisbon and Porto extending from the sea to the Spanish border is full of historical wonder, stunning scenery, amazing food and vinho, and life lived at a slower pace.
Here, 10 reasons to hit Portugal — with an emphasis on the central region — right now.
1) Luxury you can afford 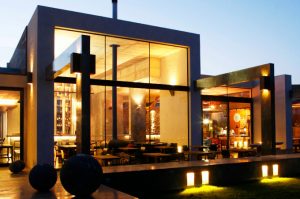 Foto: Courtesy of Areias do Seixo

The seaside and mountain towns of Centro de Portugal are dotted with luxurious hideaways. Areias do Seixo is a glass and brushed concrete eco retreat in Praia de Santa Cruz an hour north of Lisbon where all the rooms and villas have terraces looking out onto the sea and feature massive zen-worthy bathrooms: waterfall showers, driftwood chairs, bathtub Jacuzzis and private outdoor tubs. Chef Leonardo Pereira, who hails from forager mecca Noma in Copenhagen, uses rocks as plates as part of his eight-dish tasting menu ($73 per person); a lunch salad features 21 different lettuces grown on site (double rooms at Areias do Seixo start at $297 a night). 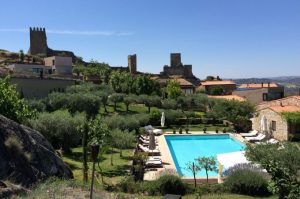 On the other side of Centro de Portugal between the Douro frontier and the Beira region in the mountain village of Mariavel is Casas do Côro, a luxe romantic wine hotel built from a small cluster of lovingly restored stone homes. In the morning, walk through ruins to Marialva Castle that overlooks a still-functioning highway first built in Roman times, then spend the afternoon lounging poolside absorbing all the quiet with a handful of sunbathing Europeans (double rooms starts at $151 per night during the high season).
2) Hammer time!
You’ll have to wait until next summer to experience this one, but on June 23 during Porto’s raucous São João Festival (think Mardi Gras in scope) thousands of revelers pack the streets along the Douro River to dance, watch fireworks, and release glowing flame-propelled balloons over the night sky that’s filled with the scent of grilled sardines. In a nod to some ancient tradition, passersbys bop each other on the head with squeaky, plastic toy hammers. Purists use live leeks. The party ends the following morning with a dip in the ocean. Tip: A great place to take in all the fireworks is at Taylor’s Port House and Restaurant overlooking the firework’s launch site along the Douro.
3) Liquid lunches (and desserts)
Booze abounds all over Europe, and Portugal is no exception, but the Portugese take the time honored tradition of alcohol consumption to another level (though Portugal feels very much like a drinking culture, it’s not a drunk culture; revelers during Sao Joao were conspicuously sober). Take your pick from light, refreshing Vinho Verde from the north, full bodied port wine from the Douro Valley, or down a shot of the sweet liqueur Ginja from a solid chocolate cup in the central town of Obidos. Some hotels like Casa da Ínsua near Viseu and Casas do Côro in Mariavel produce their own vintages. Or just order a glass of wine at the nearest gas station — they all have bars.
4) The sweet and savory ‘rivalry’ between Lisbon and Porto 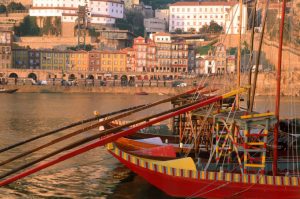 The national dish of Portugal is “bacalhau,” dried, salted cod, but locals tell us that Lisbon is known mostly for sweets — find their signature custard tarts, pasteis de nata, on every street corner, but those proffered by Pasteis de Belém, which has been baking them since 1837, is said to be a religious experience. Porto, meanwhile, is full of tripeiros — tripe eaters, and the wildly popular francesinha, a large, messy ham and sausage sandwich served in a pool of hot tomato sauce with melted cheese and sometimes topped by a fried egg. Try one at Café Majestic on Rua Santa Catarina.
One thing we couldn’t get enough of all throughout Portugal was the squid. It was soft, never chewy. Locals say the secret to superior squid is to bring it to a slow boil in a pot of cold water with a whole onion; once the onion is cooked, the squid is perfectly done.
5) The most drop-dead colorful castle you’ll ever see 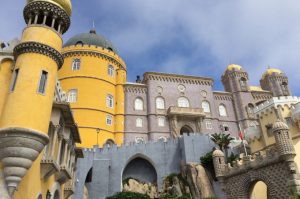 Forget this austere, fortification stuff, the Portuguese know how to do castles — it’s all about splendor.
Sitting atop a mountain in the town of Sintra, Pena National Palace started as a chapel in the Middle Ages before King Fernando II got a hold of it in the early 1880s. He turned it into a stunning example of Portuguese Romanticism: pink, gold and gray façade, Moorish-influenced tile work, stone columns painstakingly carved to resemble coral reef and a ghoulish stone triton (half-man, half fish) greeting visitors in the courtyard.
Tour the former royal family’s opulent living quarters then stroll through the labyrinth of paths and narrow roads that make up the exotic, lush arboretum of surrounding Pena Park.
6) The bread 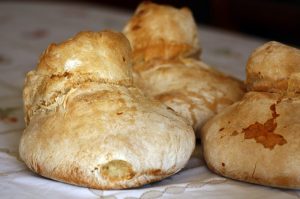 Photo: Shutterstock
You can tell a lot about a country’s food culture by the bread basket at restaurants, and in Portugal, every piece we sampled pre-meal was top notch. None of this dry, flavorless cracker stuff you find in some countries. Our advice: Do not skip the bread. The Portuguese take their bread baking very seriously — breakfast is typically a no frills affair consisting of coffee and a roll. Select from brown, dense and hearty, or crusty and chewy. Dunk it liberally in local olive oil.
7) Life’s a beach
Two hours south of Lisbon on the Alentejo Coast (so not technically Centro de Portugal) and still slightly underdeveloped, Comporta is the “it” destination of Portugal — it’s where Lisbon’s fashion and media crowd, as well as surfers, go to unwind on white sand beaches where there’s really nothing much to do but hang out. (Sounds great, right?) Stay at the Vale do Gaio Hotel near Torrao (rooms start at $100), or Casas na Areia consisting of four fishermen’s huts turned chi-chi (from $560 per night).
8) Getting lost in one of the world’s oldest college towns 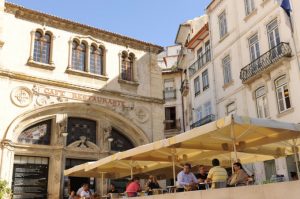 A couple of hours north of Lisbon sitting above the Mondego River is the white city of Coimbra, Portugal’s version of Oxford, home to one of the oldest university’s in the world. This UNESCO World Heritage Site features a magnificent Baroque library of more than 2 million titles. Walk the narrow streets of the Arab-flavored old town, and stop for petiscos (small plates, like tapas — just don’t call it tapas!) at Petiscos & Vinhos where chic academics go to lunch. The squid salad is worth the trip alone.
9) The chance to step back into medieval times 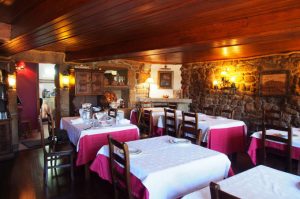 Several historical villages comprised of crumbling castles, narrow, twisty roads and stone walls crop up the closer you get to the Spanish border, a reminder of the endless battles that waged between the two countries as they vied for territory. Sortelha is one such fortress town. To get to the castle, you have to pass through an opening in the surrounding stone wall barely big enough to squeeze a Peugeot. Once inside, you’ll probably notice you’re the only visitor there. Keep looking — there’s an amazing restaurant, D. Sancho, named after two medieval kings, nearby. No one speaks English and the bill comes on a torn piece of notepaper, but the vinho, bacalhau, pão (bread) and local queijo (cheese) are welcome enoug
10) You can pick up a hitchhiker and not get murdered 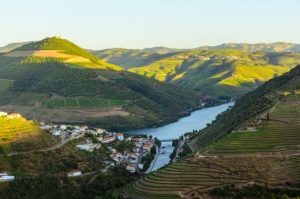 Photo: Shutterstock
Maybe it was too many sips of white port (hot tip: We hear cocktails made from white port is apparently a thing among hip Lisboners) and 20 year tawny at Quinta da Pacheca in Portugal’s spectacular Douro Valley but when a Brit named David with no baggage asked us for a lift to a nearby town, we said — why not? Stopping for another tasting at Quinta do Tedo with our mysterious passenger didn’t help our judgement but we survived and the memory of our roadtrip through the Douro Valley lives on. We recommend driving yourself through the Douro Valley by renting a car from Avis at Lisbon’s International Airport and if you’re feeling really adventurous, forego the GPS system for old fashioned maps. You might get lost — we did a couple of times — but that’s part of the adventure.
Source: New York Post